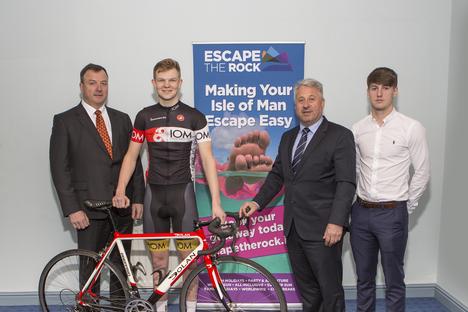 ESCAPETHEROCK.IM BECOMES COMMONWEALTH GAMES TEAM CHAMPION
EscapetheRock.im, which is part of Richmond Travel, has joined the sporting ranks as Team Champion supporting the Isle of Man Commonwealth Games’ team for the 2018 tournament.
Through the partnership, the travel company, which launched last year, is providing vital funds to enable Manx athletes to attend the Games in Gold Coast, Australia.
Brian Kelly, Chairman of Escapetherock.im, said: ‘The team at Richmond Travel and EscapetheRock.im want to give our athletes the best chance to excel in their field during the 2018 Gold Coast Commonwealth Games. Our contribution will help towards the costs of coaching, equipment, travel, support and treatment. We know how hard the Isle of Man Commonwealth Games Association work to raise funds to support Manx athletes so they can thrive and do us proud.’
The partnership was confirmed when Brian Kelly met with Commonwealth Games’ Vice President, Basil Bielich and cyclist Leon Mazzone who is hoping to qualify for the 2018 Games.
Basil added: ‘We are so grateful to all our Team Champions, without the support of these generous local companies we wouldn’t be able to represent the Island as this international occasion. Not only does it put the Isle of Man on the world stage but also gives local athletes an important experience which will help their sporting careers in the future.’
EscapetheRock.im joins Auxesia, SMP Partners and Skanco as Team Champions.
For more information about becoming a Team Champion, contact Juliet Holt: juliet.cgaiom@gmail.com 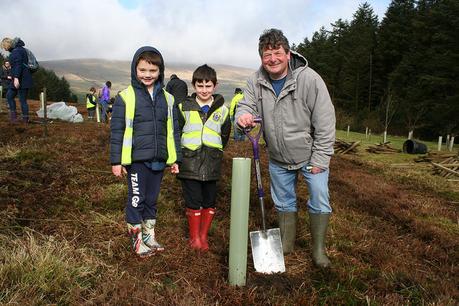 Pupils add to Children’s Wood in DEFA initiative
Primary school pupils this week added to a growing Children’s Wood while learning about nature.
Six schools took part in Trees for Life, run annually by the Department of Environment, Food and Agriculture (DEFA) at Conrhenny Community Woodland.
Since the initiative began nine years ago, 4,000 primary pupils have planted saplings in a dedicated five hectare area called the Children’s Wood.

This week’s visitors, aged five to nine, planted oak, ash, downy birch, rowan and alder saplings under the supervision of DEFA’s experienced foresters.
This was after learning about trees in the classroom with the help of DEFA education packs.
David Cretney MLC, Member of DEFA responsible for Forestry, Amenity and Lands, said: ‘TheProgramme for Government outlines the importance of conserving and cherishing our environment and promoting recreational use of our beautiful countryside.
‘Through Trees for Life, children connect with the environment, learning about the crucial role of trees in supporting a healthy environment for both the landscape and the people who live around them. They learn how tall trees grow and how to estimate their age and height plus identify the seeds and leaves.
‘They also develop a wider appreciation of nature and the surroundings we are lucky enough to enjoy in the Isle of Man.
‘Children then plant their own trees, writing their names on the protective tubing for identification. They can then return time and time again to visit them, watch them grow and benefit from being outdoors in such a fantastic setting.’
Mr Cretney – who helped out at yesterday’s planting session with Graham Cregeen MHK, Minister for Education and Children – continued: ‘The first trees, planted in 2009, are growing well, with some of the taller specimens having tripled in height from their original size.
This year, some pupils were given the task of measuring the tallest trees, mapping them to identify which species is growing fastest.

‘Pupils also explored other parts of the plantation to see work undertaken by volunteer groups.’